Don never let anything slow him down. A Cornell College graduate, he spent his early 20s working with the Peace Corps in Honduras, educating rural populations on HIV and AIDS at the height of the 1990s AIDS crisis. He began his teaching career in Honduras, studied for his master’s degree in education while teaching in Detroit Public Schools, and returned home to work at Fairview Elementary, at the time one of the most under-served schools in Denver.

Don never stopped, letting his passion for education commit him to the 60+ hour weeks and high stress that came with his job. As a self-described workaholic, he loved it.

When he started to get sick, he didn’t let that stop him, either. At first. After years in HIV education, Don knew the symptoms he was experiencing. “I just kept teaching,” he says. “I was in complete and total denial. I thought, ‘I’m just going to work, work, work.’ ”

It was only when he lost 20 pounds in a single week that he let his sister take him to the hospital for testing.

Don was diagnosed as HIV positive, which had progressed into fully developed AIDS and pneumocystis pneumonia. He was dying.

Don spent that summer between the hospital and his parents’ couch, fighting for his life and too sick to even move most of the time. He fought through the crisis, but faced a lifetime of living with an incurable illness. He feared for the quality of his life, his future, and the social stigma of an HIV-positive diagnosis. So, he buried himself in work again. “I went 100 miles an hour all the time. Just always, always on the go. But over the years, that took its toll.”

After years of being undetectable, a word that describes when a person living with HIV has a low viral load that cannot be detected with blood tests, Don started getting sick again, and the dam finally broke. “I was completely incapacitated. It all came tumbling down.” Don says. “I recognized, ‘I think I need help.’”

Don resigned from teaching and finally started looking for support. That’s when he reached out to Project Angel Heart.

Coming from a family committed to service, Don had watched his parents volunteer for Project Angel Heart for years and had even joined his mother for meal deliveries. He finally admitted to himself that it was time to reconnect, this time as a client.

Don began to fix the bad diet spurred by a lifetime of being on-the-go, leaving his cheap and quick go-to meals of instant mac and cheese and microwave dinners behind him. 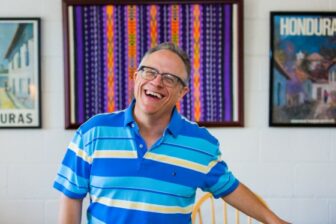 Don will live with his diagnosis the rest of his life; there is no cure. But through advancements in medicine, what was once an immediate death sentence has become more of a chronic condition. There is still so much for Don to accomplish in his life, and Project Angel Heart meals help him to do it.

Since receiving meals, Don said he has learned how to correctly portion his meals and better track nutritional value. They have also helped give him the energy and motivation to exercise and keep himself healthy.

“At times, I have needed Project Angel Heart financially, and at other times I don’t,” Don says. “But at times I am doing well financially, it keeps me on track with nutrition. That’s key. Come hell or high water, I know I have those in my freezer.”

Don is teaching again, now as a part-time substitute and running his own tutoring business. But as with his meals, he has learned to take everything in moderation.