The board of directors is pleased to announce that Owen Ryan has been hired as the next President & CEO of Project Angel Heart. Owen will officially start in his new role on August 16, 2019. 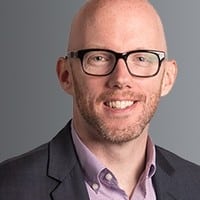 In addition to a passion for the role of food as medicine, Owen brings an extensive background in nonprofit management and leadership to his new position. Most recently, he served as the executive director of the International AIDS Society (IAS), an association with more than 11,000 members and 60 staff based in Geneva, Switzerland. During his time at IAS, Owen led the organization through a historic period of growth in annual revenue and a significant shift in strategic direction.

“We are excited to have Owen taking on the role of President & CEO,” said Lorez Meinhold, chair of Project Angel Heart’s board of directors. “Owen brings an exceptional combination of energy, sensitivity, and proven leadership. We know he will carry forward Project Angel Heart’s amazing work and help expand our ability to promote the power of food as medicine and serve people in need of healthy and nutritious meals.”

Owen’s passion for public health was solidified during his time as a Peace Corps volunteer in Malawi. In the nearly two decades since, he has worked for a variety of health organizations, including the Bill & Melinda Gates Foundation. He has served on several boards, including the Elizabeth Glaser Pediatric AIDS Foundation and The Global Fund to Fight AIDS, Tuberculosis and Malaria. Owen’s public policy research and writing have been published in various peer-reviewed journals including The Lancet and Health Affairs.

Please join us in welcoming Owen to our community! He is passionate about the work and mission of Project Angel Heart and is excited to help us grow as an organization.