This is a new recipe created by our sous chef, Summer Polson. In October 2018, when we started cooking and delivering 40 percent more meals each week, we also made a big change to our menu: incorporating a weekly vegetarian meal. We have had fun figuring out different things we can do with eggs, and this recipe was an instant hit! So much so that a volunteer who was here dishing up the meal for clients requested the recipe. Here it is—we hope you enjoy!

Place a 2-quart saucepan on the stove over medium-high heat. Once warm, add the canola oil, then add the onions, garlic, and ginger. Saute for 3-5 minutes, until they get some color and caramelization. Then add the tamari and mirin slowly—they may splatter upon hitting the hot pan, so be careful. Stir in the coconut milk and peanut butter, mixing well.

Bring the sauce to a simmer and cook for 10-15 minutes. Remove from heat, let stand for 10 minutes, then transfer to a blender. Add the lime juice and cilantro and puree the sauce until smooth.

Crack the eggs into a bowl and mix well.

Place a saute pan on the stove over medium-high heat. Once warm, add half the canola oil, then add the onions, carrots, and bell pepper. Saute for 3-5 minutes, then add the cabbage and reduce the heat to medium. Saute the vegetables for another 3-5 minutes, until they are cooked to your liking.

Remove the pan from heat and stir in the scallions and ginger. Let stand.

Place a Teflon or nonstick pan on the stove over medium heat. Once warm, add the remaining canola oil, then add the eggs. Cook until just scrambled, being sure to stir often so the chunks don’t get too big.

Once the eggs are cooked, add them to the pan of veggies, then add the fresh basil. Stir well and season to taste with salt, pepper, and a little lime juice. Top with peanut sauce and serve immediately.

Brandon Foster began his life in the kitchen at the Best Western in Frisco, Colorado, almost 18 years ago. His passion for ingredients and drive to learn technique led him down the mountain to Denver, where he worked in two of Denver’s most fondly remembered restaurants, The Fourth Story and Mel’s. He joined the crew at Vesta in 2005 as a line cook and became executive chef in 2010, focusing on getting back to the roots of cooking through charcuterie and seasonal ingredients. Ultimately, Chef Brandon’s career highlights centered on events like Plates for the Peak, Invest in Kids, and James Beard Foundation dinners where he could play a role in helping people in need- a passion that led him to Project Angel Heart in 2016. Outside the kitchen, Chef Brandon enjoys spending time skiing, camping, golfing, and eating with his wife Larissa and their three kids. 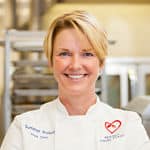 Summer Polson is Project Angel Heart’s sous chef. She grew up in Aurora, Nebraska, and Brookville, Ohio, raising paint horses and a bunch of pets on her family’s hobby farm. After earning culinary arts and food service management degrees from Johnson and Wales University in Charleston, South Carolina, Summer moved to Colorado. She cooked in a restaurant in Colorado Springs and at the Denver Country Club before coming to Project Angel Heart in 2008.